A great activity (ice breaker and data gathering combined!) that gets the participants guessing each other big hitter moments. 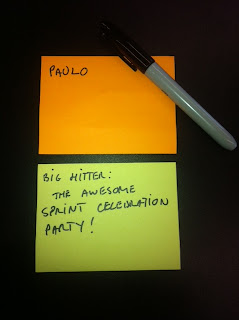 This activity was described by Matthew Skelton here (the original post). I have changed it slightly, keeping the the big hitter for cool things only. I also changed the activity period for whatever is identified by the facilitator/group.

As per Matthew experience, he had one SNAP out of the team of 8, but the mismatches also provided very useful insights into the team dynamic: