This variation of the happinessradar activity gets the average happiness over a timeline. It worked well for a release retrospective. The main difference for it and the typical happiness radar is that the column titles are time based, instead of being area specific.

Below is a photo from a happiness radar used on a large group retrospective where the context included a long timeline for a event (from 9 months ago since  that event at SP; last month; the last 3 days—from  the day the event started until now). 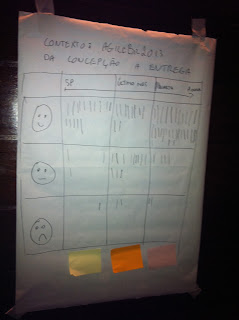